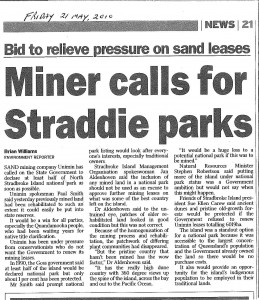 Before the Bligh government could implement its staged National park policy it first had to renew expired sand mining leases on North Stradbroke Island.

Courier Mail article from 21 May 2010(see above)  ‘Miner calls for Straddie parks’. In this article the company makes it clear areas can be made National Park after they have been mined.

Sand mining company Unimin [Note: Unimin is now called Sibelco] has called on the State Government to declare at least half of North Stradbroke Island national park as soon as possible.

Unimin spokesperson Paul Smith said yesterday previously mined land had been rehabilitated to such an extent that it could easily by put into state reserves.

Paul Smith also acknowledges in the article that the company’s sand mining interest would be looked after under this plan:

Sibelco advocated for ‘staged’ National Parks, saying this would not affect their mining interests.

They said this in a Public Relations ‘Fact’ Sheet:

At Unimin we have looked closely at our lease holdings and have identified areas of undisturbed land and rehabilitated lands that would be suitable for National Park, without affecting our current and future mining interests. We believe a staged implementation of National Park, over a number of years, could achieve a balanced environmental, economic and social outcome.
See ‘fact’ sheet.

Sibelco advocated for the 50% of the island to be National Park by 2011. The government even followed the company’s plan in this respect.

On the company’s so-called ‘Sustainable Stradbroke’ website, the company says:

The key outcomes of Sibelco Australia’s Sustainable Stradbroke Vision are:

The sand mining company provided maps to the government to show where National Parks could be declared without disturbing their plans for mining the island. 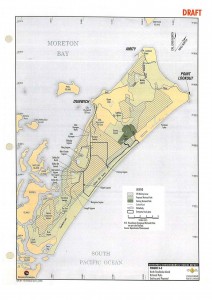 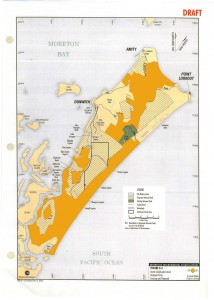 The map on the left is one of the maps produced by the sand mining company designed to ensure that they could continue sand mining. This was included within the company’s (then called Consolidated Rutile Ltd) 2003 Enterprise Environmental Studies Report.  The same map is included twice – the colours in the version on the right have been adjusted so the company’s suggested National Parks are orange/brown.

The government’s National Park map (below company’s map) is similar, the main differences being:

— The mining company’s map doesn’t include the areas which have been dredge mined, but the article above says that these areas can be included.

— The mining company’s map includes Brown Lake as National Park, the government’s does not

— The mining company’s map allows a larger area to the north of the island between Amity Point and Point Lookout to be National Park.

— The government’s National Park areas have, for the most part, been designed around mining lease boundaries. 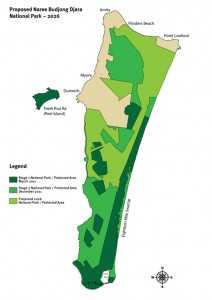 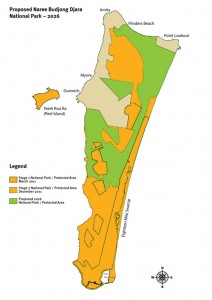 For the past six decades, the sand mining companies have dominated the decisions about Stradbroke Island public land use.

Fraser Island had an independent inquiry to investigate sand mining impacts on the island.  This resulted in the Fraser sand mining being shut down in just six weeks.

On Stradbroke, there has never been an independent public investigation process. The public has been completely shut out from public land use decisions which effect this island’s high conservation values.

There is substantial evidence showing that the government’s ‘staged’ National Park is indeed the company’s own National Park plan.